Skip to content
Oxford celebrated National Flash Fiction in style with its first ever Flash Slam (http://eightcuts.com/events/flash-slam/), which showcased this fabulous format with some of the performance and pizzazz of a poetry slam. Fourteen fabulous writers came from as far afield as Birmingham, Bristol, and Gloucester, and included the likes of Jonathan Pinnock, bestselling author of Mrs Darcy vs the Aliens (http://www.mrsdarcyvsthealiens.com/), and Gloucester poet Laureate candidate Sarah Snell-Pym (http://www.snell-pym.org.uk/sarah/). They each performed for four minutes to a packed Albion Beatnik Bookstore, and subjected themselves to the scrutiny of expert judge and our headline reader Tania Hershman (http://www.taniahershman.com/), one of the UK’s most celebrated flash fiction writers, who delighted us later in the evening with readings from her book My Mother Was an Upright Piano. They were then scored out of 100 by a panel of judges comprising Paul Askew (http://paulaskew.tumblr.com), poetry slam winner and editor of Ferment Magazine, author of short story collection Knowing Look Rebecca Emin (http://ramblingsofarustywriter.blogspot.co.uk/), and leading Oxford cultural blogger Ingrina Shieh-Carson (http://aicarson.wordpress.com/). All presided over by yours truly. 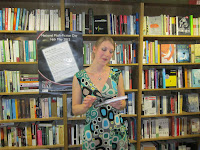 The top three performed again in a final that demonstrated perfectly the dazzling diversity of the form. The pieces that got them there couldn’t have been more different. Joe Briggs (http://somedaysthethundergetsyou.blogspot.co.uk/) is a music blogger whose semi-autobiographical pieces have the energy and edge and sense of imminent eruption of those underground punk gigs you heard about but never seemed to go to. Anna Hobson (http://makewordsnotwar.wordpress.com) is one of the leading figures in the Oxford literary scene, coordinator of poetry (and many other things) at Oxford International Women’s Festival and MC of spoken word at Oxford Pride. Her first round flarf (an alternative form of literature achieved by pasting quotations from the internet into a formal structure) was the highest scoring piece of the night by a long long way and it took the audience several minutes to regain their composure after her exquisitely-crafted and breathtakingly delivered look at the strange world of internet dating. But the winner, fittingly, was Bristol’s Kevlin Henney (http://asemantic.blogspot.co.uk/), an award-winning die hard practitioner of the flash form who married superb storytelling with effortlessly engaging delivery to carry off the spoils. 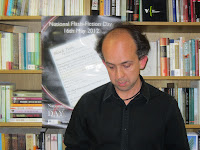 I should add a postscript that shows just how successful this whole endeavour has been, and illustrates the debt we all owe to Calum and NFFD. On Wednesday of this week, I took a troupe of my fabulous eight cuts gallery regulars to the Poetry Cafe to perform at London Literature Lounge. Anna reprised her flarf to equal acclaim, and we were joined by Marc Nash, master of flash (sorely missed on NFFD). Literature Lounge host Anjan Saha was so buzzed by the vibrancy of the flash community that he and I will be running a flash slam at the Poetry Cafe on September 19th. And that’s not all. Thanks to NFFD, the Warwick Words festival organisers got in touch with me and have asked me to put on a flash slam for their festival, on October 4th. The format will be the same as Oxford – only this time our judge and headliner, for his sins in Oxford (and he thought he was just coming for a jolly night out), none other than Kevlin Henney.
So, thank you all who took part. A special thanks to Tania, and our judges on the night. And biggest thanks of all to Calum – new worlds are opening up.
- Dan Holloway

I like things which are hard to pin down: An Interview with Rob Walton https://t.co/kMNHVTX79X https://t.co/MdRe03Tnft
View on Twitter
2
4
National Flash Fiction Day @nationalflashfd