Diane: Your collection This is (not about) David Bowie was published in 2018 by Retreat West. Could you tell us where the idea for the collection came from?

FJ: I had wanted to put together a collection for a while, but every theme or idea I had fell short. The ideas dried up. But then Bowie died and it set off a chain reaction. It was like watching an explosion. A supernova. A massive star had collapsed at the end of its life, and it sent out these ripples, this burst of energy. His impact on people spilled out. He was the first record my mum had ever bought, but my dad couldn’t stand him. People were crying for him, writing about him and what he meant to them. David Bowie was more than a person. He was a feeling. He was an idea. He allowed people to express themselves, to be experimental. He embodied everything I wanted to do with my writing. So that’s when the lightning struck. The words started flowing, and they didn’t stop.

Diane: You have lived most of your life in Bristol. Do you think the city has shaped what you write about or how you write?

FJ: I’ve spent my whole life hiding my Bristolian accent. I can’t say ‘burger’ in any respectable way. But now I’ve moved to Oxford I feel more Bristolian than I ever did living there, and more attached to it as part of my identity. I’ve been blind to how much my writing was held together by it. There are characters with Bristolian accents, school day memories in my collection, but I grew up in a very different Bristol than the one people think of now, the dynamic, eccentric metropolis. I grew up in an old mining village near Fishponds called Mangotsfield where my Mum grew up. People didn’t really read. And there were so many reasons for that (which if you get me a pint – I can go on about for hours). A big part of me writes for them.

Diane: On a typical day, how much time do you spend writing?

FJ: I don’t have a typical day. Life has been throwing me around A LOT. At the beginning of the year, I was having to fit it around a job. But since May, I was lucky enough to have been given the chance to write for a year. For a month or two, I was writing five days a week but with a break on Wednesday and Saturday. I would write in the mornings and edit a different project in the afternoon. But then I had to move to Oxford, and I couldn’t keep it up. So after a month of NOT writing, I’m back at it.

Diane: You are one of the judges for this year’s NFFD micro competition. Could you tell us what’s important to you in a micro fiction?

FJ: Truth. Something that resonates. As you’ll see from my own writing, I have a tendency for enjoying the absurd, a bit of magic. But not just for the sake of it. There has to be good cause for it. I find that surrealism has a way of expressing truth better than realism sometimes.

I think it’s only right to warn people that I have personal aversion to anything that isolates people from a story or reading in general – like using Latin, or words that people have to look up, or even experiences to some extent. But I am always excited when I see something that experiments, breaking the rules to convey something powerful.

Diane: Do you think it’s important for a writer today to engage with social media?

FJ: It’s really important for writers to engage with people, but there are many ways to do that. Social media is one. It suits dressing-gown-wearing hermits like me really well and it connected me to other supportive writers, which has been great. But even social media has a way of shutting me down after a while too. I was marked ‘fragile’ since I was a kid and so the intrusion of bad news can get a bit much. So it’s good to know yourself, and what is good for you.

It also takes a fair bit of time, investment and creativity to connect with people well. I used to tweet and post for a job, so I was a bit lame at doing my own personal accounts. That’ll probably change now I have more time and energy. But if there’s anything I would say about social media it’s this: write something that’s worth tweeting about first. My dream is to write something where other people will do the social media for me. That’s my goal. How amazing would that be! 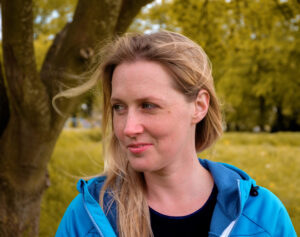 FJ Morris is a proud Bristolian and award-winning author. Her collection ‘This is (not about) David Bowie’ was published by Retreat West in November 2018 and received a special mention in the Saboteur Awards for Best Short Story Collection in 2019. She’s been published in numerous publications in the UK and internationally, and shortlisted for a variety of awards. Find out more at www.freyajmorris.com.

FlashFlood is now closed for this year! We still have a few stories to read, so if you've not heard yet don't panic. Look out for all the stories on NFFD (Saturday 6 June).
View on Twitter
7
85
National Flash Fiction Day @nationalflashfd

Last day to submit to FlashFlood! Our submissions close at 23:59 BST on 31 May. Up to three entries considered.
View on Twitter
36
66
National Flash Fiction Day @nationalflashfd

Lovely to meet everyone today on the @SmokeLong zoom party and to talk about NFFD.
View on Twitter
2
34
National Flash Fiction Day @nationalflashfd

Wow, you guys! FlashFlood has received well over 1000 subs so far this year, and they're still pouring in...that's as much as we received last year in total, and nearly double what we received in 2018! We're going to have to add more slots this year....