She'll be joining NFFD Co-Director Ingrid Jendrzejewski in putting together this year's anthology of flash fiction from around the world.

We'll be announcing this year's theme in time for those of you participating in FlashNaNo projects this November, but in the meantime, you can get a better sense of Sophie's work by checking out Bottled Goods, her novella-in-flash that has been longlisted for the Women's Prize for Fiction 2019 and for the Republic of Consciousness Prize.  You can also find links to her online publications on her website, sophievanllewyn.com. 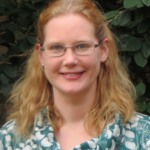 Ingrid currently serves as the Editor in Chief of FlashBack Fiction, and a flash editor at JMWW, and has served as both non-fiction editor and editor-in-chief of the Evansville Review.  She has published over 100 shortform pieces and has won multiple flash fiction competitions, including the Bath Flash Fiction Award and the A Room of Her Own Foundation’s Orlando Prize for Flash Fiction. Her short collection Things I Dream About When I'm Not Sleeping was a runner up for BFFA’s first Novella-in-Flash competition. She has been nominated for a Pushcart Prize, Vestal Review’s VERA Award, and multiple times for Best Small Fictions.