We're currently open for submissions for our anthology and micro fiction competition! To celebrate, we've conducted a series of interviews with our anthology editors and competition judges. This week, we conclude with an interview from our artist-in-residence, Jeanette Sheppard! Diane Simmons speaks to Jeanette about flash fiction, sketching, and where she draws inspiration from...

Diane: As well as being a talented artist, you also write flash fiction, with numerous publications including two NFFD anthologies. Which came first, writing or sketching? Or have you always done both?

Jeanette: Thank you for saying that about my writing and my sketches, Diane. I’d also like to say how thrilled I am to be Artist in Residence for NFFD. The straightforward answer to your question is that the writing came before the on-location sketching, but in a sense they happened at the same time. I enjoyed both drawing and writing as a child, although I only ever copied from drawings in books which is quite a different experience altogether to on-location sketching and I only wrote one story that I can remember. I drew on and off from photographs until my early twenties. I began writing in my early forties. I used to work in TV Drama production so writing scripts felt like the natural place to start, but I was increasingly drawn to prose and then wrote a novel while studying for an MA in Creative Writing. When I discovered flash fiction via the first National Flash Fiction Day in 2012, it felt like a light had been switched on and I began to submit to competitions. Although, I didn’t submit a great deal because there weren’t many places to send flash fiction back then and I didn’t have the confidence to rework pieces and keep sending them out. A few years ago, when I was fifty, I reached a point where I didn’t feel I could write anymore. I was suffering anxiety related to my parents’ increasing ill health and, at the time, my mother’s dementia diagnosis (my father was diagnosed too a year later). I told my step-daughter how I had started to draw again to help with my anxiety and her partner introduced me to Danny Gregory’s Everyday Matters: A Memoir. Danny Gregory taught himself to draw by sketching life around him after his wife became paralysed from the waist down following an accident. Through his book I discovered urban sketching, also known as on-location sketching. Not long after this I began writing and submitting again. Stepping back from writing and looking at the world through a different lens had made a difference. I submitted a flash I’d sent out a while back that had been rejected. It was short-listed for the Fish Prize and later published in National Flash Fiction Day’s 2014 anthology, Eating My Words. Since then writing and on-location sketching have run alongside each other and support each other. Until recently I saw my sketches purely as a way of relaxing while paying close attention to the world, but people are now asking to publish them. I was honoured to be asked to provide the cover artwork for your debut collection of flash fiction and create the artwork for NFFD.

Diane: I see that you have a flash fiction in a short story vending machine at Edmonton Airport, Canada. Can you tell us a bit more about that?

Jeanette: There is a wonderful community of flash fiction writers out there who post information about opportunities. I saw a post by the amazing writer Helen Rye, whose wonderful story is the title of the NFFD Anthology Sleep is a Beautiful Colour, saying that Jason Lee Norman was looking for flash fictions to go into a Short Edition vending machine in a Canadian Airport. There are machines in a number of locations in France and Francis Ford Coppola has one in his San Francisco restaurant, Cafe Zoetrope. I believe the one in Edmonton is the first in Canada. The machine stands in one of the terminals, passengers press a button and out comes a flash fiction. Freya Morris, who, by the way, has just published her stunning debut collection This is (Not About) David Bowie, is in the process of approaching airports in the UK. I hope it happens!

Diane: I understand that you run something called ‘Sketch Coventry’. Could you tell us a little bit about that?

Jeanette: I set up Sketch Coventry five years ago. It’s an open meet-up that runs once a month. Anyone can turn up on the day and sketch no matter what their experience. It’s an opportunity primarily for people to capture life. I came to on-location sketching through anxiety but people don’t need to have experienced anxiety to come along. We are not a mindfulness group, but paying attention is inherent in on-location sketching because you have to look and focus on what is in front of you. People come along for their own reasons. Some come just for the process, some come to practice their drawing skills, others will come because they like the social side, many attend because they feel less self-conscious sketching on the street when they are in a group. Whatever the reasons people come along, the end result is a sketch of Coventry. It might be a sketch of a building or buildings, it might be people in a cafe. It can be whatever the sketcher wants to capture. There are big changes happening in Coventry, especially because it is City of Culture 2021, so our sketches are also a personal record of a changing city.

Diane: Coventry suffered very heavily from bomb damage in the war, but there are still some beautiful buildings left, with the half-ruined cathedral being particularly interesting. Looking at the sketches one your website, I notice that there aren't any of the grander buildings in the city. Is this deliberate?

Jeanette: Absolutely, there are many wonderful buildings. The Cathedral ruins are certainly a poignant and powerful reminder of a devastating time in the history of Coventry. There are also other magnificent medieval and Tudor buildings that survived the bombing such as The Old Grammar School and Bond’s Hospital, plus smaller gems tucked away, such as the Weaver’s House and Lychgate Cottages. In answer to your question about why I haven’t included any of the grander building on my website, it’s really a question of what my eye is naturally drawn to. I’m interested in shining a torch on people and on the smaller things in life. Is it any surprise I write flash! Actually, there is only one sketch of Coventry on my website at the moment because many of the images I’ve created to date were drawn across two pages in a landscape sketchbook and they are difficult to reproduce successfully on the website. I never imagined I would have a website, sketching was just for pleasure and something to be shared with other sketchers.

Diane: Most writers draw on their own life experiences in some way in order to write fiction. Are there any periods in your life that you use more than others as material?

Jeanette: I suppose it might help to say here that I’m not a planner. One of the reasons I enjoy writing flash is the sense of discovery it allows. I can sit down and see what comes out then sculpt what’s on the page into some kind of shape. Over the last few years my parents’ physical health and dementia has been an enormous part of my life and without doubt the feelings around that have influenced my writing, but I wouldn’t say I have written about that experience in a direct, CNF way. It is more about tapping into emotions surrounding the experience. One of my flash fictions, for example, features a narrator filling her lounge with water so that she can swim in order to escape the pressures of caring. That obviously didn’t happen in real life, but the emotional truth is there. I’ve recently realised that I’ve probably written some flash as a form of protection: I’ve created situations that I may one day have to face, especially in terms of dementia. My latest flash to be published, in The Nottingham Review, features a mother who doesn’t recognise her daughter. That hasn’t happened to me yet, but after I’d written it I realised I was preparing myself for the day that it might happen. Not recognising family doesn’t happen to everyone who has dementia, of course, I want to be clear about that. I have just completed a novella-in-flash which has absolutely nothing to do with dementia but the emotions that can surround caring for someone are definitely present in some way, be it in a real, magically real, or surreal way. 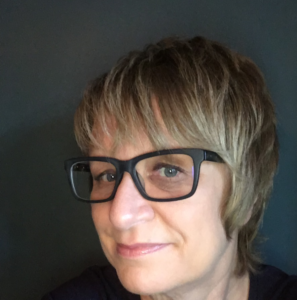 Jeanette Sheppard is a short fiction writer and sketch artist. Her most recent flash fictions can be seen in The Nottingham Review, Ellipsis Zine and Flash Fiction Festival Anthology: Two. Other stories have been published in a number of literary magazines, including Bare Fiction, Litro and The Lonely Crowd. Jeanette’s art revolves around sketching on streets, in buildings, cafes, fields, train stations, anywhere that she happens to be, in ink and watercolour. Every month she runs Sketch Coventry, a self-led open meet up. You can find out more at: jeanettesheppard.com or on Twitter: @InkLinked @JinnySketches